Vaporizer chambers are made out of several different materials and they do have an affect on your vaporising experience.

Depending what material your chamber is made out of, you may experience a different flavour and it can also have an effect on your vaporizer’s efficiency.

Watch the below video to find out more about vaporizer baking chambers, what materials they made out of and how they may influence your vaping experience.

Below you can read the transcript of the video if you prefer reading and watching pictures.

Back again helping to keep you guys up to date with the latest and greatest in herb vaping news and tech.

Now, for this video we’re going a little bit deeper into our Vaping One-on-one Web series, getting Aussies in the know about herb vaping.

We’re gonna have a look at vaporizer chambers in this video.

Now, I’ve touched on convection and conduction heating elements in a previous video. But now we’re going to have a look at the actual materials that these chambers are made out of.

Every vape critic is going to have their opinion and which chambers better or why they like a certain style of chamber better than another.

But in my opinion as long as your vaporizer has a solid computing unit with a good heating element you’re going to be able to get some quality vapor out of it.

Starting from the left here, we’ve got the ALD Amaze WOW, which is equipped with a ceramic baking chamber. 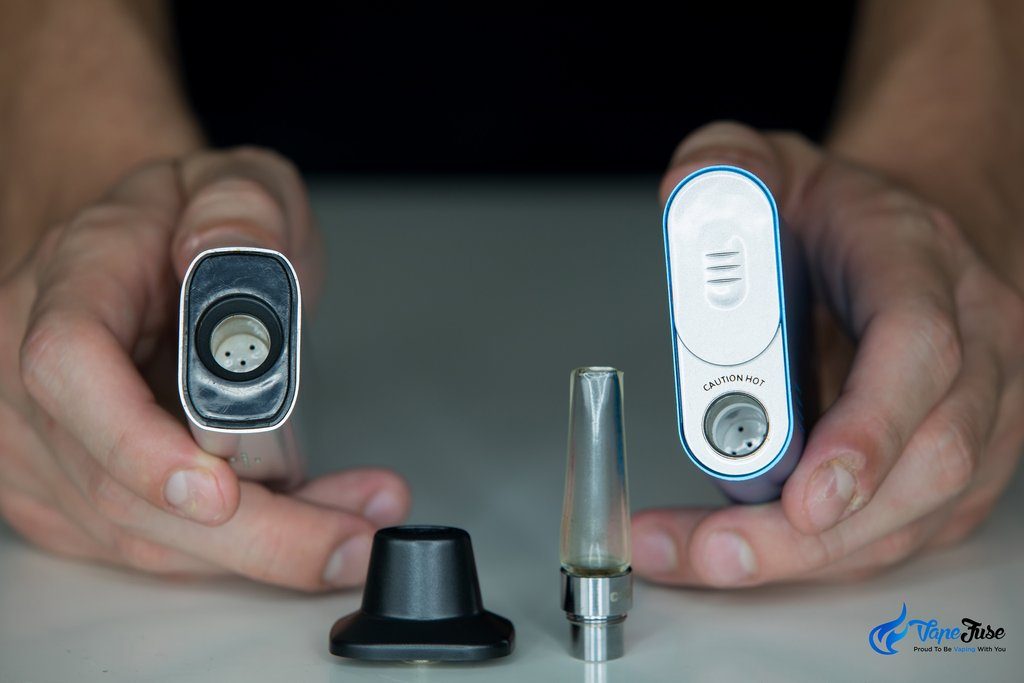 Ceramic is arguably the most common element used to make vaporizer chambers, it’s in a bunch of different devices that’s the Vinci IQ. 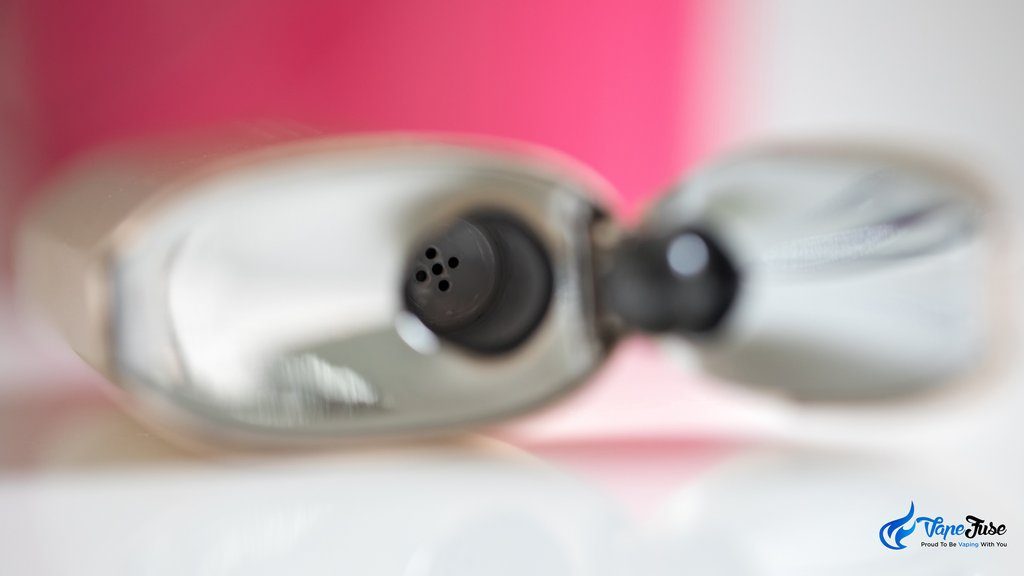 I’ve got the TopBond Novae, Flowermate devices, bunch of them all equipped with
ceramic baking chambers. 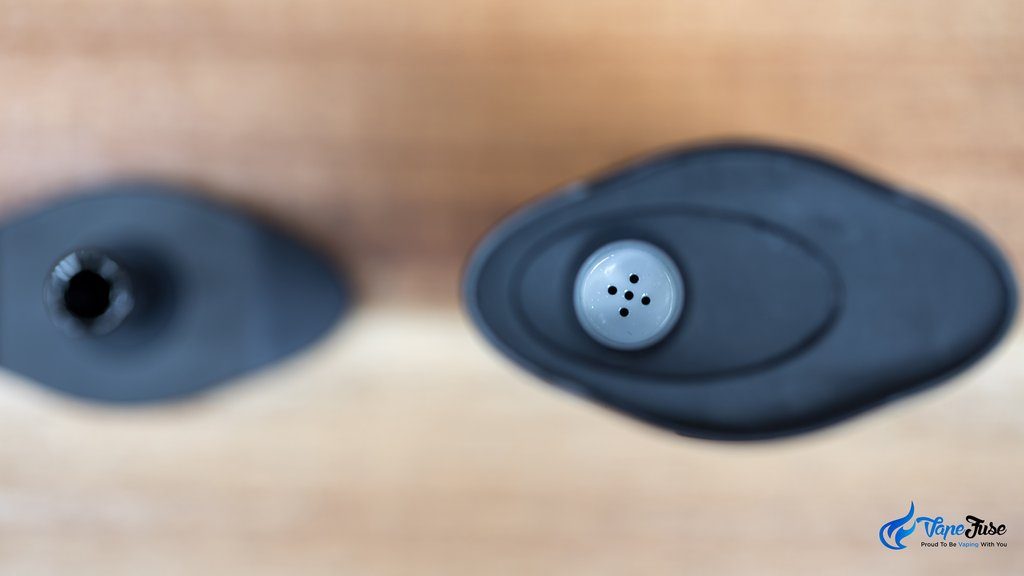 Ceramic obviously it can be heated up to an extremely high temperature, so it’s
actually used for nails and concentrate and stuff like that as well, if they don’t have quartz or titanium they’re most likely ceramic.

Ceramic doesn’t have any odors or anything that it sort of exudes when it’s heated to a large degree, so it’s ideal if we use with vaporizer chambers.

Now, what does happen in my opinion, is if you have a true ceramic and it heats up too high the vapor can sometimes get a little bit toasty, so you can get that near combustion flavor.

If you’re dealing with a device like this, I’d keep it below 200 – 210 Celsius, don’t really push up that maximum temperature.

My favorite I’m gonna have to say, my go-to when it comes to the chambers, is glass. I love devices like the Arizer series of vapes, that have a glass chamber that you pack into, that you sort of obscure the heating element with and that’s how the vapor is generated. 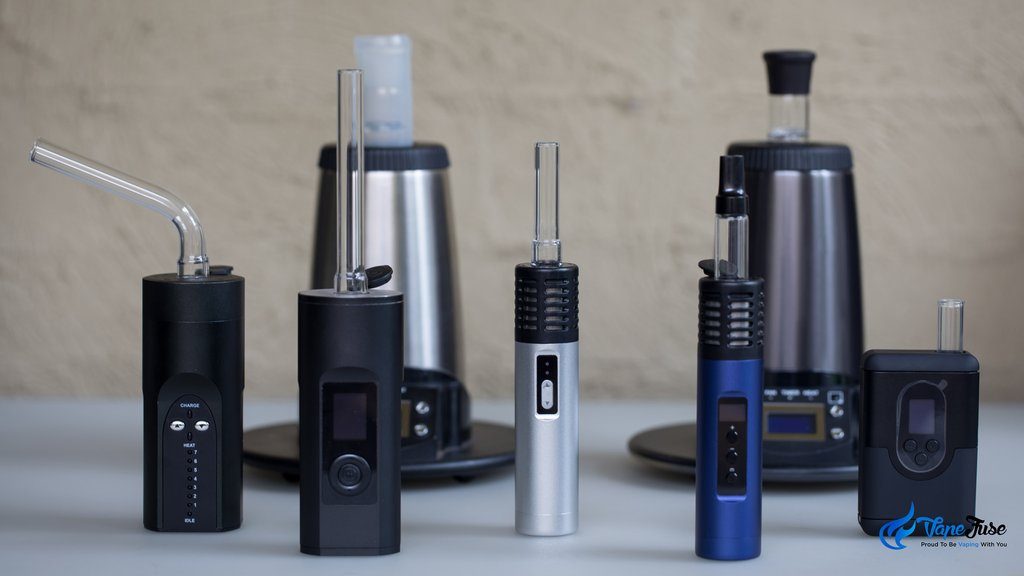 Unlike most of these devices where you packing directly into the chamber, with the Arizer line of vapes, you just pack into this glass mouthpiece at the top, so your ground dried herb into the bottom where it has a filter screen, so it’s not going to pull through and it’s probably the purest way to generate vapor. 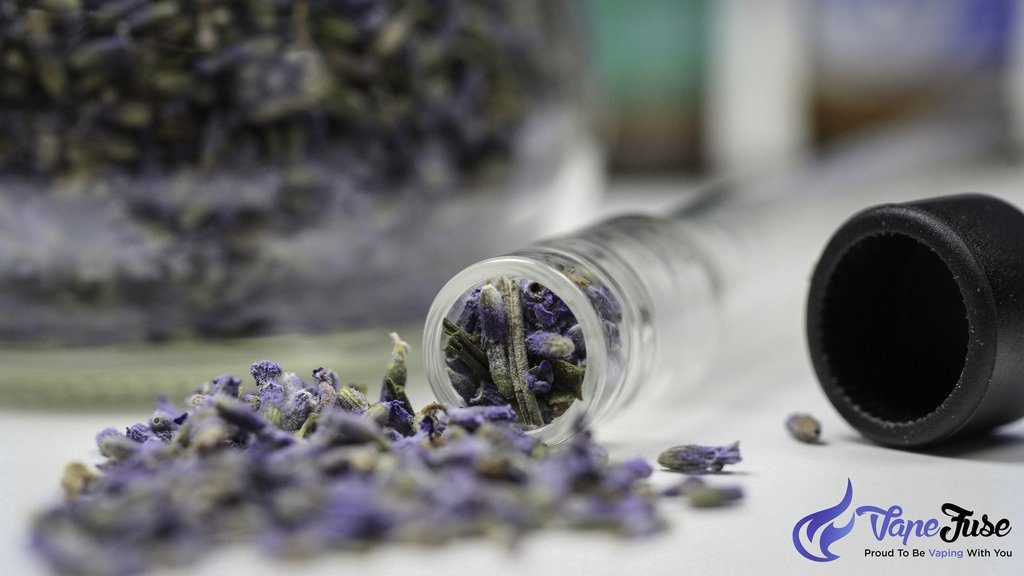 There’s no contact between the herb and the heating element strictly heated air.
So, this is so to speak a pure convection vaporizer.

Next, we have the Hydrology9 which comes equipped with a Teflon baking chamber. This is the first time actually came across Teflon in the design of vapes, but it works very effectively. 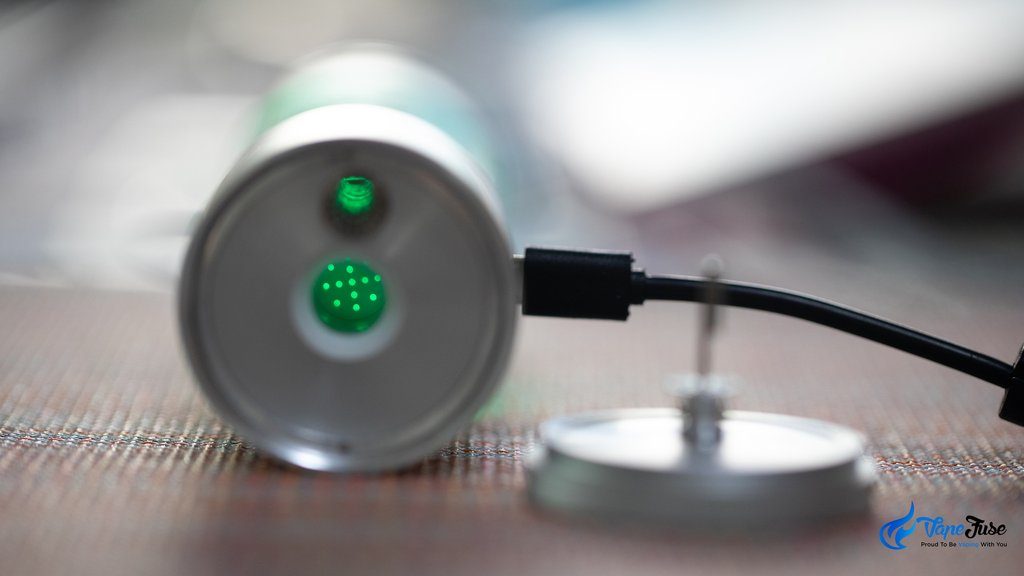 We’ve got that nonstick component to it, same as ceramic it’s odorless, has sort of a great flavor to it.

The Hydrology9, in general, is a convection vape, that has an amazing flavor profile.

I’m yet to see Teflon using any other vapes, but it’s interesting you know I see the sort of new technologies developed down the line, you see, more and more things being used in the design of vapes.

Some wax vapes, in general, come with four or five different atomizers, equipped so, titanium and quartz or ceramic. So you can switch it up depending on your preference. 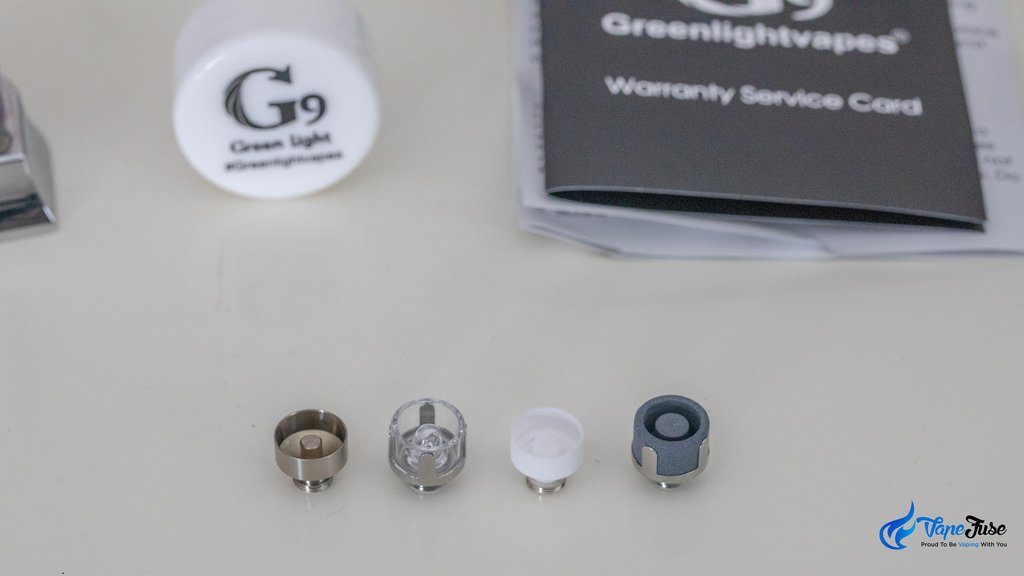 The PAX has an aluminum baking chamber similar to the Storz and Bickel Crafty or Mighty. 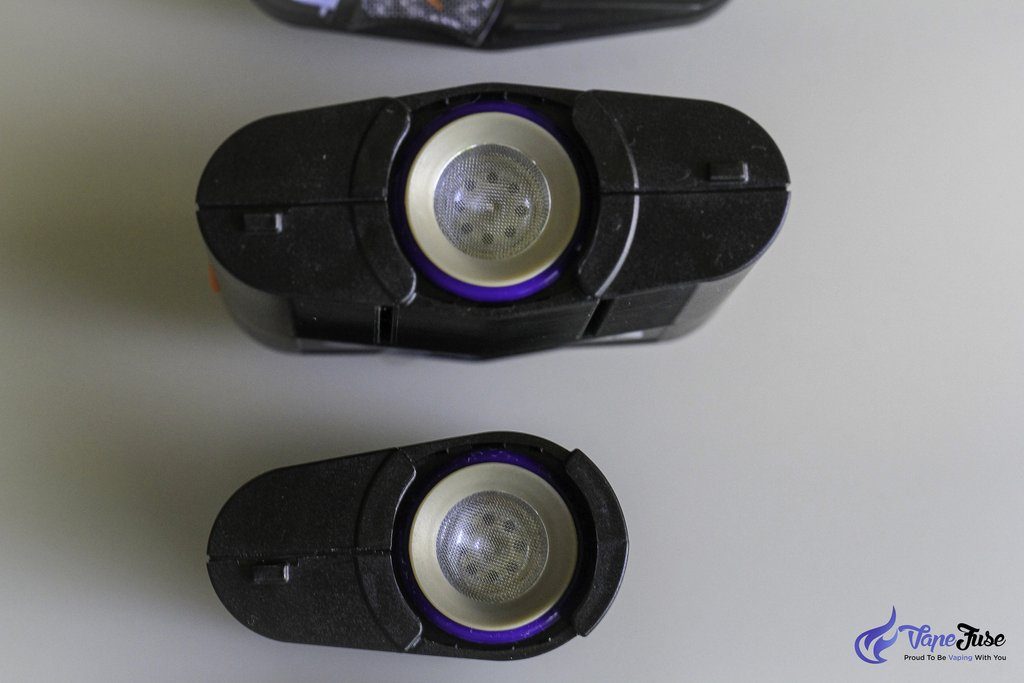 The PAX has a pretty great flavor profile, it’s got the baking chamber in the bottom. So that the vapor can be cool by the time it reaches the mouthpiece at the top.

The aluminum is great for that it doesn’t sort of act as much of a coolant as sort of zirconia or ceramic would.

It gets the vape for a little bit warm, but as I said this vape, it’s got a bit of a long vapor path so it helps to cool it down.

And lastly, we’ll touch on the PUFFiT X which has a brass baking chamber. 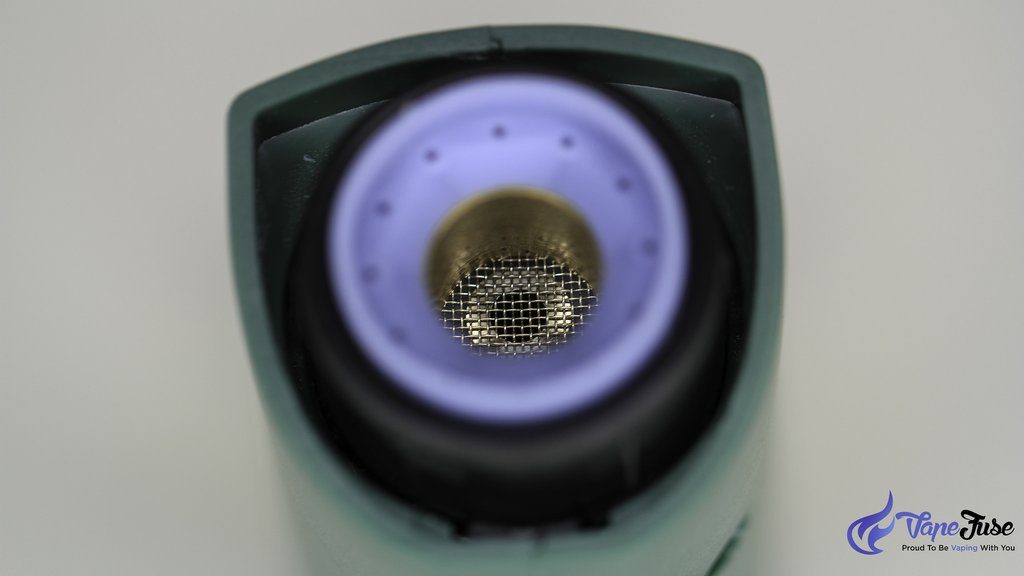 Now, brass is only used in the PUFFiT and the Vapir line of vapes to my knowledge, obviously could be a few more out there, but the flavor that this thing just exudes is amazing, the brass has a very very pure tasting flavor that comes out of it and the chamber actually isn’t that big and it doesn’t get that hot compared to some other baking chambers.

So, brass is something that I’d like to see use a little bit more regularly down the line. So, if this I haven’t touched on all the different chamber styles, some vaporizers come equipped with zirconia chambers or stainless steel, but I hope this gives you guys a bit more insight into the chambers of most vaporizers developed with.

Thanks guys and remember to subscribe to the channel to stay up to date with the latest and greatest in vaping news and tech.