As the number of manual vaporizers hitting the market increasing year after year, we can’t deny that they are gaining popularity.

Despite vaporizers getting more and more technologically advanced, there is surely something to simple manual vaporizers that we are attracted to.

It could be due to the pure taste, or no electronics, it could be the fact that the user is more involved with the vaporization process … I am not sure.

One thing we are sure on though is that manual vaping is a little more ‘dangerous’ than using a plugged in or battery powered vaporizer.

Working with the open flame of the torch and hot surfaces requires you to be mindful when vaporizing to avoid burning yourself, others or objects around you.

We have recorded a video specifically to address manual vaporizing safety. If you are using or considering using a manual vaporizer, it is worth to have a quick watch.

If you prefer to read, please find the transcription of the video below for you.

Good day guys, Matt from VapeFuse Australia here. Back again helping you keep up to date with the latest and greatest in herb vaping news and tech.

I’m here today with another video, for our Herb Vaping 101 Webinar Series, it’s helping to get Aussies in the know about herb vaping.

Today, in general, I’m going to be touching on manual vaporizers.

Manual vaporizers are a concept you should be familiar with after a few of these videos, they are vaporizers that require no external power source or internal battery in order to generate vapor instead, it’s usually done by an external source like a flame or by an internal chamber like a butane tank, that’s like in this Iolite here.

When our customers hear that we have a vaporizer that uses butane, to generate vapor they are obviously very hesitant, because you’re putting this thing in your mouth and you’re inhaling, so having both your herbs, a heating element and butane in there doesn’t seem safe at all, rest assured this Iolite device is very premium and about as safe as it gets, if you use it properly.

There are a few things that you have to consider before starting to use a manual vape.

If you’ve never vaped before, obviously it’s gonna be a little bit tricky using something that requires a bit more operational skill, as opposed to just a device like a Volcano where you can take a bag, you can hit it and inhale and it’s pretty much just like a traditional smoking method.

With these manual devices, a little bit more playing around that has to happen before you can get your stream of vapor going.

With this Iolite for example, when you’re using a butane you should only ever use butane there’s at least triple filtered or five times if you have access to it.

Using pure butane in general, means that you’re gonna get a much more consistent stream as there won’t be any hot spots or little flickers in the flame and it’s gonna ensure that if anything were to happen so if the vapor part or whatever were to come apart and the butane was to enter it, it’s not gonna do any lasting damage.

Now when we look at manual devices like the DynaVap, the Lotus Vape or the Vapman which you recently copped from Switzerland, it gets a little bit more tricky and if I’m being honest, a little bit more dangerous.

Any device that you’re going to be heating up with a lighter to generate vapor, heat obviously becomes a factor so you have to make sure you’re not burning your fingers, not putting the device down on a surface that can perhaps cause damage.

Now, I’ve burned myself on all of these devices, but it’s not to say that it’s simple to do, it’s just human error becomes a factor, when you’re not paying very much attention.

If I’ve had a big day and I’m just coming home just playing around with this and maybe try to light it and then hold it from the end and burn my finger.

We’re gonna show you guys how to safely use a torch and light a manual vaporizer.

If I’m doing that as I said, clean butane I’m in a location where I can put the device down without having worries about burning myself or the table or rug or anything that’s lying about.

You want to make sure where you’re holding your hand isn’t anywhere near to the surface that the flames gonna be because this surface obviously as it’s metal heat retention becomes a factor, so it’s gonna retain that heat for quite a significant amount of time. So, I take my lighter, making sure that the flames at the right height for your device.

I’m gonna want to heat it directly in the middle keeping that flame away from my fingers,

Now., that I’ve taken my hit the next step is to put the device down in the safe location where it’s not going to cause any damage as I’ve stated.

Now, this is quite simple with the Lotus, as obviously it has the flat base you just sit it down, with the DynaVap is a little bit more tricky, the cap is the part that you’re heating, so that’s the part that’s gonna retain the heat. 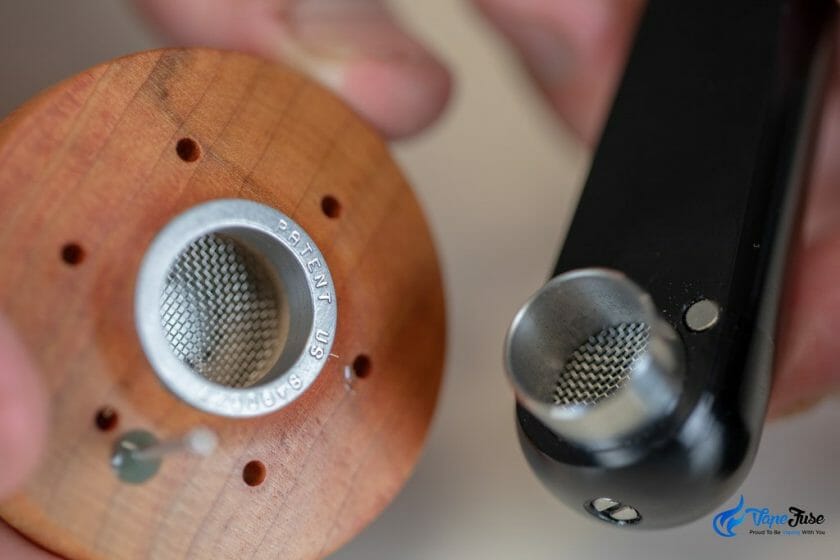 Obviously when you’re holding the device by the end you’re gonna burn your finger if you were to put it down on something like plastic or wood, might possibly cause some damage so the best to pick up a Dynastash – you can put your DynaVap in it, has a magnetized front you can click you the bus directly they’re out of harm’s way. 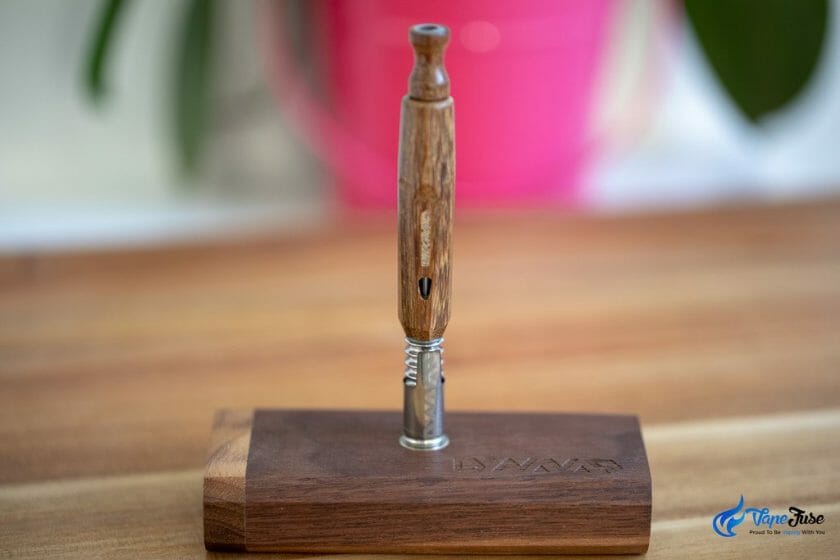 With the Vapman, it becomes a little bit more tricky, lighting this device is something of a craft, pretty much what you, do is you’re trying to hit the bottom of this copper apex, surrounded by some gold flake, I’m gonna hit the middle of that little apex there with the end of your flame.

Obviously, as you can see the air pathway passes right up through the device all the way up to the mouthpiece, so if you’re not careful with that flame will shoot right on through and burn your fingers. 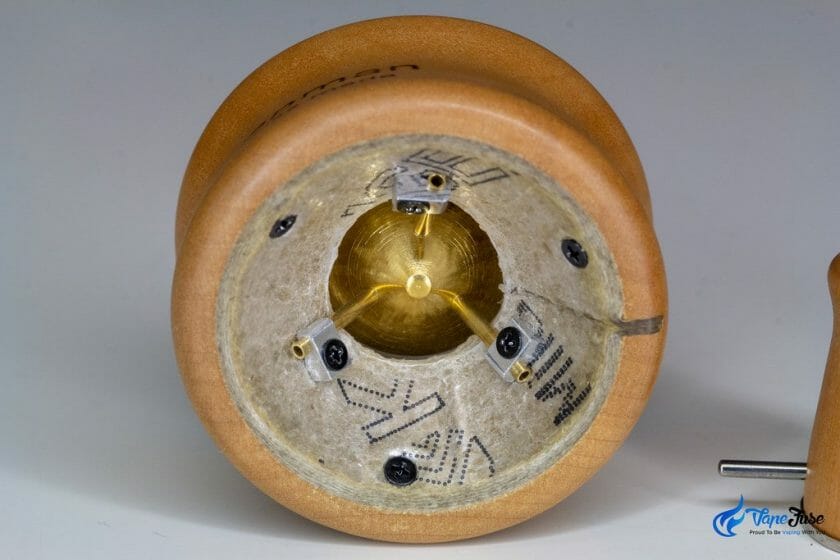 So lighting this VapMan now, what I’m gonna do, is just hold it by the second ring making sure that the fingers are completely out of the way of the flame and possibly danger, just remove the little cap off the end of your lighter, you’re going to want to heat that with the flame directly in the center, just a few seconds at a time.

See, so I’m not coming into contact with the flame or with the heating element in any extent and when I’m putting this device down, the outer rim of wood isn’t actually going to be that hot, so you can just feel free to put this device right down like that.

Manual vaporizers guys they’re quickly becoming my new favorite style of vape, they’re very simple to use you never have to worry about charging them and the vapor quality is off the charts.

I hope this video gave you guys a little bit more of an insight into what manual vapes are all about and how to safely use them and avoid burning yourself.

Thanks for watching guys remember to subscribe to the channel to stay up to date with the latest in herb vaping news and tech.

Best Vapes 2021
Connect With Us 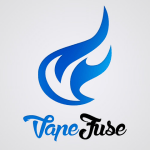