Hi guys, it’s Michelle here from VapeFuse.com and today, I am excited to show you this awesome vaporizer, the Arizer Air and why it’s getting a 10 out of 10 rating by its users.

So, the Arizer Air is really awesome device for vaping herbs. I don’t recommend using liquids or other substances with it.

And if you already own an Arizer product maybe a Solo or an Extreme Q, this is the Solo here, you already know, these products are really high quality.

And this little guy it’s no different in delivering an awesome experience. 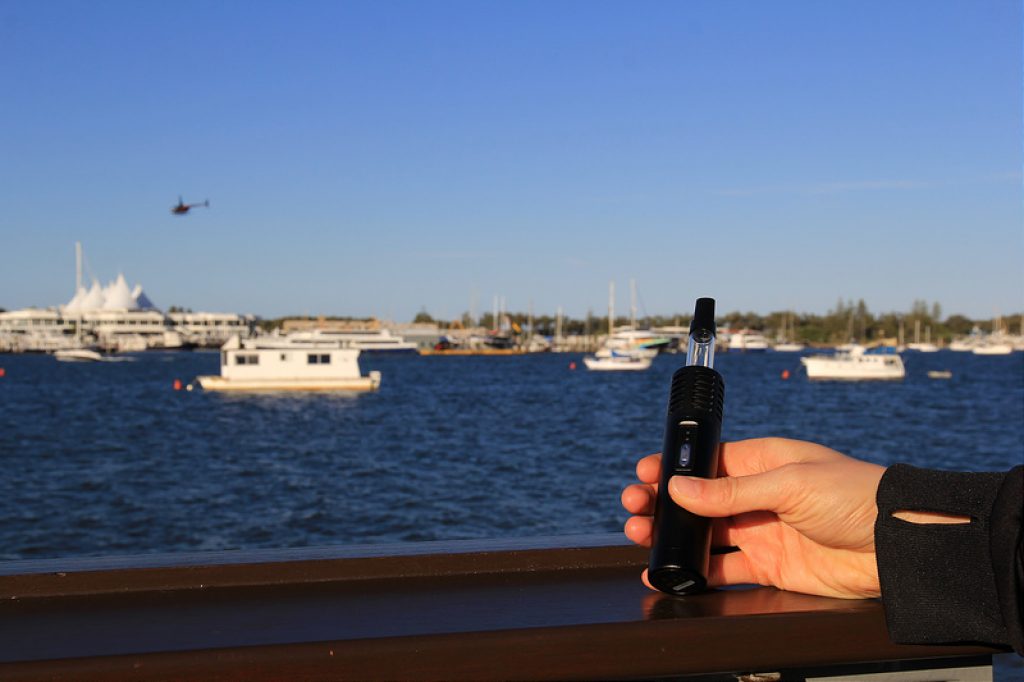 Now, it is the second portable device by Arizer, following on from their Arizer Solo that I just showed you. But, let’s take a look at the Air’s outstanding features and why it is rated so highly by its users.

Firstly, it allows users the freedom of changing the internal battery while on the go. You can carry a spare battery and switch them without having to charge it up. You can also use it while it’s charging. It is compatible with Arizer Solo parts as well, such as stems, if you already own one.

The design is sleek and ultra-compact, it’s amazing how much technology they actually can pack into such a small device. It also comes in 3 different colour choices: there is the Black, Silver or Titanium, so you can pick the one that best suits your needs. 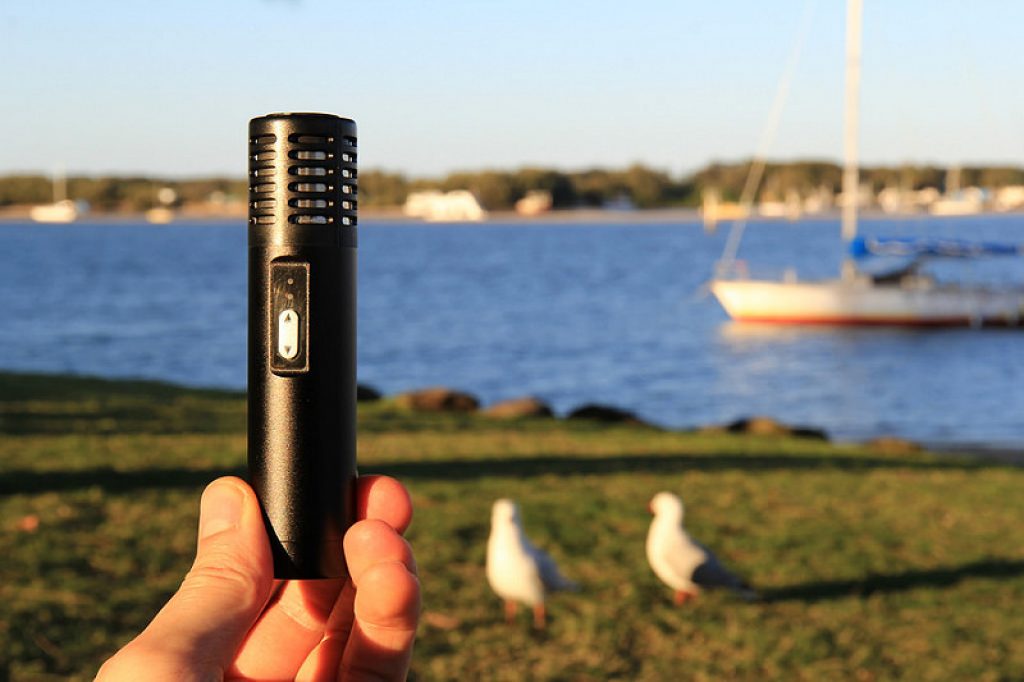 Now, the silicone case it comes with, is just awesome, because it not only helps reduce damage to it but also gives you a nice grip especially if you are on the go a lot. It also insulates the heat which is pretty cool.

Now, there is a really cool heating function on this device. It helps you keep control of your heat settings by indicating what temperature it is by using COLORS.

The Air actually offers 5 temperature settings and each has its own unique color for example.
So, you’ve got:

Now, the Heat up times range from 60 seconds to 1 min and 50 seconds, just depending on the setting you choose and battery level that it’s been charged to. 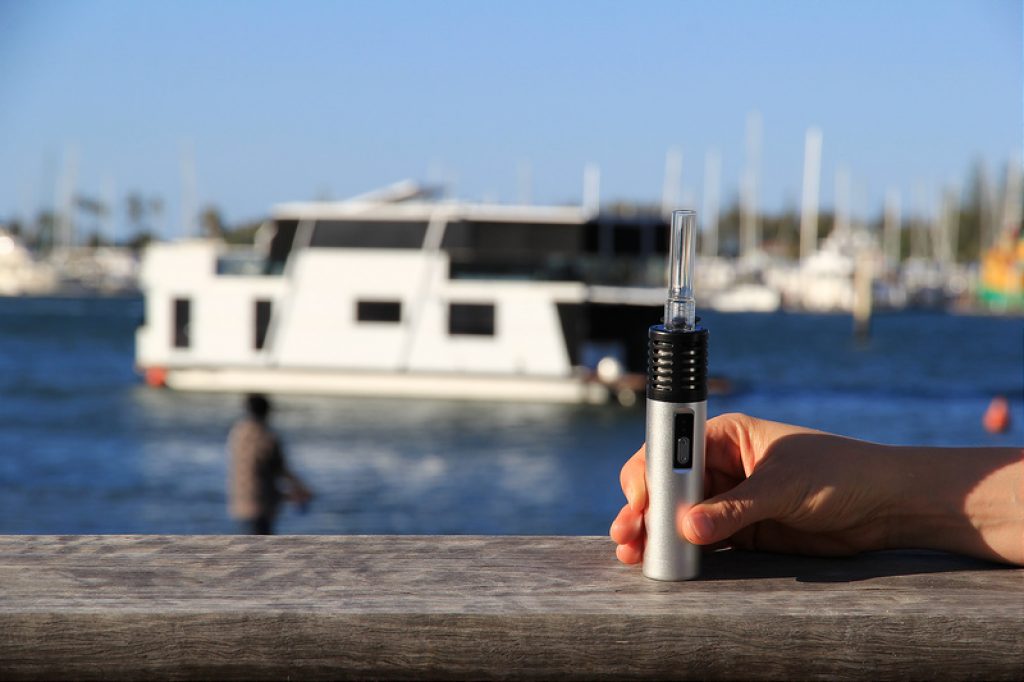 Okay, so now let’s take a look at the differences between the Air and his little friend, the Solo.

Now as you can see, the Air is noticeably smaller than the Solo, but it’s definitely not as small as a vaping pen, but it is still really compact and much you know, a lot less weight to it than the Solo.

Now, the stem is quite short compared to the Solo, but you can actually use the mouth pieces across both devices, if you’ve got both or if you have upgraded to the Air. A lot of people have done this and love the cross device use of the parts.

Now, the stem in the new Air locks in a bit tighter, compared to the previous device, the Solo. But, you know in saying that, it will still be a lot tighter the first use in both devices, but do pay attention when putting it in just so you won’t break anything. 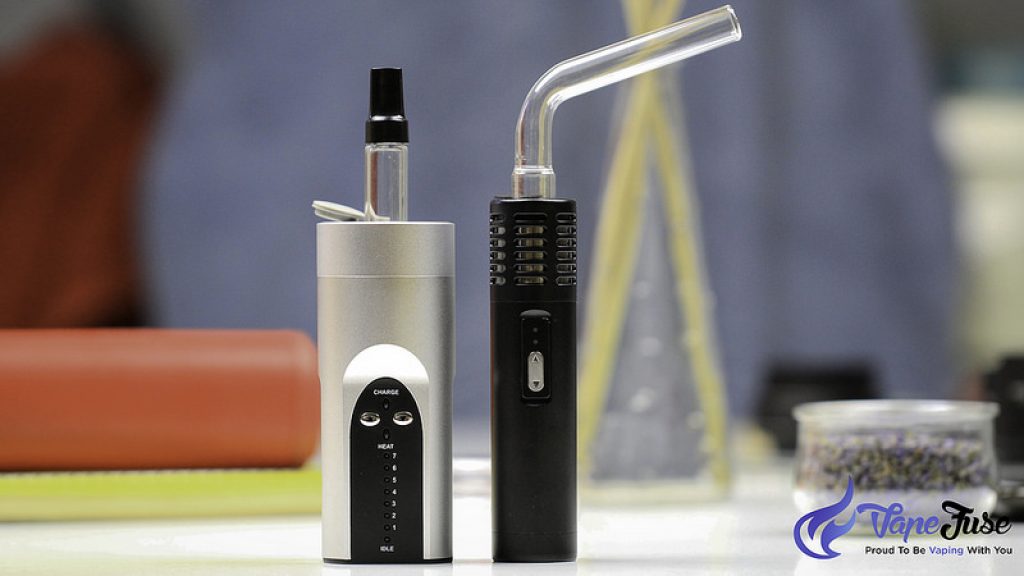 The Air also includes a glass mouthpiece with a plastic cap on it. It is pretty good as it seems to be very easy to draw from. However, if you prefer the full glass experience, you get a second mouthpiece in that kit which is also included.

Now the Solo is well known for being easy to use, but the Air has been created to be even better! Unlike the Solo all the controls are on one spot. It’s also quicker to heat up compared to the former model.

The Air also comes with a carry case that makes it easy to look after and protect your vaporizer while you’re on the go.

The Arizer Air’s design is very compact. It has the removable & replaceable batteries. It is very compatible with the Solo parts as I mentioned and it really makes it a must have device for anyone who wants a top class portable vaporizer.

And that’s it from me guys, I hope you enjoyed this video and if you love the Air, then why not check it out at VapeFuse.com.

I’ll see you soon on the next video.